Bugs with Arelith (in-game and out) should be reported here.

Hello! I tried it myself (caster cleric), I had a conlock try, a totem druid try and also a STR WM. I died, the WM died, and the druid and conlock ended up in the Bitter Coast. I also had another user try and he ended up in the Lowland Swamps.

After a lot of suspicion and lies from the pearl diver, the totem druid that helped me made me realize that you got the 'You jumped overboard' message, and according to him that is not a message you should get even if the scripts are similar. He also mentioned that he never landed up in a shore before, and that he usually just dived and came back with an item if lucky.

So... at this point I believe something was tweaked and messed up the pearl diving script, or... we were all incredibly unlucky, but that would be too much.
Top

Odd, can't say if anything has changed to this one. I'll have a look at it.
Top 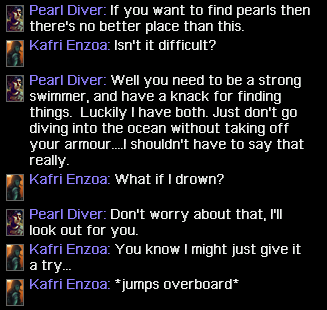 Thanks, I've fixed this issue, comes in my update today or tomorrow.
Top
Post Reply
4 posts • Page 1 of 1