You have questions? We may have answers.

Anyone know why the scrolls of animate dead/create undead/create greater undead do not spawn the level of undead as the scrolls are cast as? Just finding it silly that a 6/8 tier spell scroll is summoning level 4 zombies instead of using the caster level of the scroll as the UCL.

The animate zombie (15 lore) one is more reasonable as it's accessible from basically character creation. You get one level 4 zombie with it, which can actually do things at this level

The create undead (35 lore) is pretty disappointing when you look at the equivalent summon creature (Tiger/An elemental). This one gives you two level 4 zombies.

I assume the trend stays the same with Create Greater Undead (65 lore), except you get 3 level 4 zombies.

Note that this is someone without any cleric/wizard/caster levels that give UCL to begin with, not sure if the above holds true if say, a 20th level wizard uses the scroll.
Top

The undead summons are based off character level the scrolls/spells just summon a different number of undead 1,2,3 respectively
Top

chris a gogo wrote: ↑
Fri Jun 04, 2021 3:56 pm
The undead summons are based off character level the scrolls/spells just summon a different number of undead 1,2,3 respectively

This is not the case though.

If a level 8 character uses a create undead scroll under what you just said, they SHOULD be summoning two Tyrantfog zombies. They currently summon two normal zombies.

The scrolls also don't summon according to the scrolls casting level ( for instance, create undead scroll being casted as a 11th caster level should summon two zombie warriors but again only summons two base level zombies)

Unless you are saying the scroll tiers are determined by your characters UCL (being cleric/wizard/sorc levels), then we go back to the question of : Why? Why is a scroll summoning based off the characters UCL and not using the scrolls caster level?
Top

I would imagine the why is the same reason as the changes to GMW and elemental weapon spells.
Top

I don't see the correlation between weapon buffs and summoning spells personally, so I'm a little confused there.

I guess the point I'm trying to ask is

I understand that summon creature isn't scaled the same way as undead summons. But does it not make sense that a scroll would use the power of the scroll (i.e the spell being cast and at what level) and not the character using it's innate power? Is that not the point of scrolls - being able to use magic your character couldn't, or using resources to have some extra spells in your pocket if you need them? 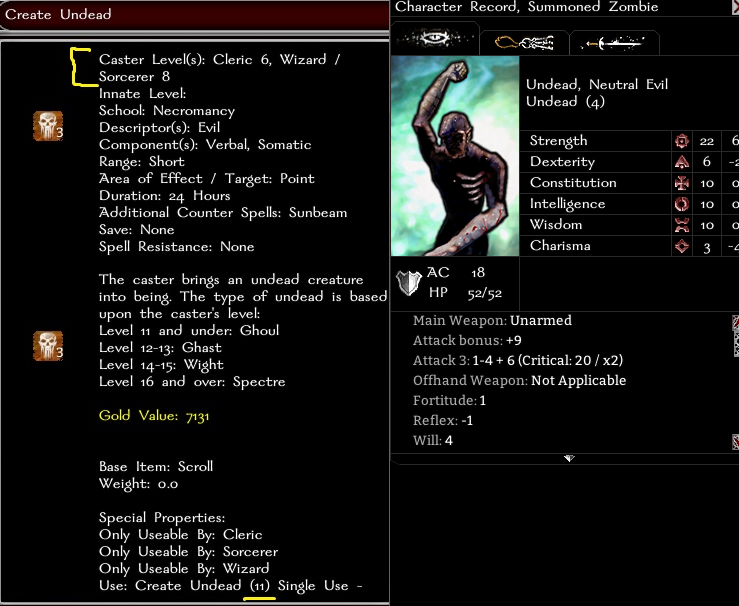 It would make sense for this specific scroll to be used as if a level 11 cleric/wizard/sorcerer was summoning it (Plus scroll levels up to 5, if the PC has loremaster levels - might I add), and giving said UCL worth of undead? Instead of what it's giving now (as shown above, two of those zombies)


Is this a scripting limitation?

An unannotated balance thing (only thing I've seen regarding this is a thread from 2015)?


On a side not, if these scrolls do take into account UCL of the character and not the scroll, then doesn't that mean lets say a create greater undead scroll being used by someone with mummy dust will net them 2 tier 6 and a tier 7 undead, compared to someone using the same scroll with no UCL getting two of the above zombies and a tyrantfog one? Doesn't that seem backwards?
Top

Not really because the first is a actual necromancer with feats and caster levels of investment the latter is someone using a scroll without character investment.

It was done when the summons were rebalanced it generally made necromancers stronger but made the scrolls kind of pointless for anyone without the investment.
Been this way for quite awhile now.
Top

I get what you're trying to say on the balancing - undead are generally more powerful than the summon creature line of conjuration just due to the amount of things they summon. But that is only when people are actually casting the spell.

Just because it's "been this way for a long time" doesn't mean it's the right way or in a way that makes a whole lot of sense.

Using the above scroll as an example, a sixth level spell scroll casted at 11th level will end up netting you two zombie warriors. The alternative is a Dire Tiger/Hell Hound or a tier three planar summon depending on your alignment.

It.. Already seems kind of on par with the current summons available for the same spell tier, no? This issue then get multiplied when you can use a create greater undead scroll, and you then get 3 tier 1 zombies, when the alternative is a vastly superior planar summon, or a vastly superior elemental.

The scrolls aren't just purchasable from vendors (as far as I know) so you need to have them scribed by other players, and due to the scroll level and the nature of summons, you will use them relatively quickly costing you a pretty penny.

You said it yourself that the scrolls are kind of pointless for anyone without UCL - Which I find really silly, hence the entire reason I'm asking why the scrolls are using a characters UCL as the basis instead of using whatever the scrolls casting level is for determining what is summoning.
Top

I think it just sort of turned out that way rather than by design. They altered the undead summoning, fixed bugs for a while as they came about and then moved on to other things. I've run into this occasionally and it is a bit silly in a way, but it's also narrow enough of a problem that I didn't mind too much.

Although, even if they would like to change it so that scrolls scale in a more useful way for characters with low UCL, it's likely low on the to-do list. A lot of things seem to be misbehaving recently, some from updates from Beamdog, perhaps some from other systems (thought I read Nwnx somewhere, oh yeah - it was the colored text) and some from arelith updates. All that comes before, so I'd assume it stays put for a long time and if it doesn't, well then it's just nice.

Slight side adventure, but overall, I'm more having (minor) gripes with mummies having regeneration. Mostly thematically - it's not the undead I'm used to from d&d. Regeneration was an unusual quality and most things just didn't have it. Vampires had fast healing as an exception, but for the most part, undead didn't have that sort of thing. It feels a bit off to me, same goes for supernatural tribesmen, that regrow on their own. For me, its a little bit like how you don't want to see every pc be a demon, lich, dragon and so on - it lessens the impact and feel. I'd rather have seen them have some other quality to even things out.

Also, I miss skeletons a bit. I may have a bone to pick with someone on that. Juuust can't get it out of my skull. Allright, thats enough.
Top

I miss skeletons too :c
Top

I agree that these scrolls should summon something more in line with their spell level. A lvl 8 circle scroll shouldnt summon 3 low level useless zombies which would be far far worse than Summon Creature 8 scroll. When using a lvl 8 summon creature scroll you get an elemental that would easily put these 3 zombie warriors in the dumpster. More consistency would be nice but I also think this shouldnt get any dev priority.
Former Characters: Kirk Senner, Lorian Darkmoon, Rayne Mashavelle, Arkin Abellan, Ryth Ellaniar, Storm Kel Abu'adir, Edros Mashavelle.
Top

Yes, it's relatively small on the grand list of things. Not sure if anyone knew a reason hence the thread. Will post in the bug section unless someone beats me to it. Seems more of an oversight than anything
Top
Post Reply
11 posts • Page 1 of 1