Burin the Earthly, and the Heartwood Saga.

Post all your ingame screenshots in here. Organize them by creating seperate threads for events.

Burin the Earthly, and the Heartwood Saga.

I really love Photo Mode in games. I take, literally, thousands of screenshots and photographs in video games whether on PC or consoles. Neverwinter Nights doesn't have a Photo Mode, but you can at least do some fancy tricks with the camera and turn the HUD off!

So, I will be posting screenshots from when I brought Burin back to Arelith, and the history of his involvement with the archipelago. Starting before he became Archdruid and up to the present time! All of the moments in-between - The adventures and misadventures, the memories and the legends!

Exploring the forest and meeting Myon was the first thing Burin got to experience. I will never forget when he requested to meet Aurlyn the Elk, and he came riding through the trees on horseback with Buppi also on horseback. Very Tolkien-esque! From there, Burin learned Elven extremely quickly, I think one or two RL days, and established a close friendship to Myon which lasts to this day.

Myon was the first place to take Burin in, and with it came many adventures and long lasting friendships.

Eventually Burin began spending more time in the Grove; so far it was still very quiet, though there was the occasional exciting interaction. For example, when a Firbolg meets a Forest Gnome!

The Sister Ravens, Ansuz and Fehu, had come to Burin many centuries ago. He found them as chicks within his pocket one morning, as he sailed a ship to nowhere in particular. It was then he realized that the path of the Druid came to him just as much as he came to it.

The Sister Ravens have helped Burin unlock the mysteries of his past, but even they cannot guide through all the fog. It was later when Burin made a significant stride in his practices of Druidry, when he was able to call upon the Runed Ravens: Nauðr, Ehwaz, Tiwaz, and Ür.

Burin's many adventures across Arelith took him to all the realms, including the vast and green Minmir realm. Little did he know, however, of the occupants there and their faith.

As he battled the giants and ettins in the forest, he came upon two others who were also beset upon by those monsters. Without second though Burin sprinted in to assist their battle, and after, introductions were made.

Flowers would sprout behind Burin's step as he walked before gently fading away. Some however, were stomped upon by one angry man of faith in particular.

The lady, however, Burin continues to be infatuated with to this day!

After countless adventures and becoming friends with many people - Including folk from all the major realms such as Bendir, Brogendenstein, Cordor, Guldorand, and Myon - The subject of the Heartwood was brought up between two extraordinarily wise and talented Druids. Adilshahsa the Bear, and Meriam of the Fuzzypaw.

The Grove was vapid and quiet, echoing from its former self. People would come and go on occasion, but there was no Circle at the time. Burin had heard very good things about the previous Archdruid Beryl, but she had left suddenly. And the Grove went silent without her. The need to create a new Circle and revitalize the Grove was ever present, and Burin with the other aforementioned two discussed what could be done.

It was then they in fact suggested and encouraged Burin to hold a Moot to become the new Archdruid. He did not think himself worthy - But because of this they knew it to be the right choice.

And so Burin called out across the realms and held that Moot. More then thirty people showed up to hear his words and challenge his oaths and beliefs. In the end, not a single person said "Nay" when Burin asked if they would have him as their Archdruid of the Heartwood Grove.

And so began the new legacy of the Grove, and a new saga for Burin and the Circle!
Burin the Earthly.
Top

Someone who became one of Burin's oldest and most loved friends was Adilshahsa the Bear. First they met each other in Myon, and as time went on they would embark on Nature Walks. Sometimes joined between the Dark Heart and Heartwood Groves, and sometimes just they two.

Burin's relationship with Brogendenstein continued to grow deeply as well. He had many incredible interactions with Mighty Thane Falgrim Vintergard on their own - And the rest of the Dwarves seem to have a profound respect and acknowledgement to see a Dwarf as the Archdruid.

The Runed Ravens began to whisper more secrets - And eventually a final name was revealed. Mímisbrunnr, the Ancient One. A Raven of the ethereal and the cosmos. Burin was given the wisdom to perform a ritual to summon this giant raven, but he could not do so alone. So he approached those whom he shared heritage with most - The Dwarves.

Others joined as well as a ritual within the barrow grounds of the Dark Spires was held. Drums were beat and throat singing was heard atop the chilly spires, and with a glorious blast - the Ancient One came forth. He questioned why he was there, and Burin spoke to him. Burin said he wishes to see the skies as he once did, to feel the voice and the world. Mímisbrunnr replied, "Wisdom is not given through drink, but to be gained after that which has been drunk. If you wish to see the world as you did before - A sacrifice must be made. Sight...for sight."

Knowing full well what the sacrifice entailed, the cost was nothing compared to how much the quest meant to him. And so the great raven plucked out Burin's right eye with his beak and gobbled it down.

The raven disappeared, and in that moment, a great flaming wrym flew overhead and crashed down upon Burin. At long last he had learned the True Shift of the Dragonshape.

Many exciting plots unfolded as Burin continued to expand his and the Grove's relations across the many realms. One such plot was brought up with some amazing people from Guldorand, who offer twists and turns as a plot involving the shamanistic hags of Arelith's dark wilderness corners played out. Burin even got to carry people on his back as a dragon as he flew to take them home!

Burin would also attend Angela the White's many arcane classes. She would get very grumpy towards him if he were ever late! 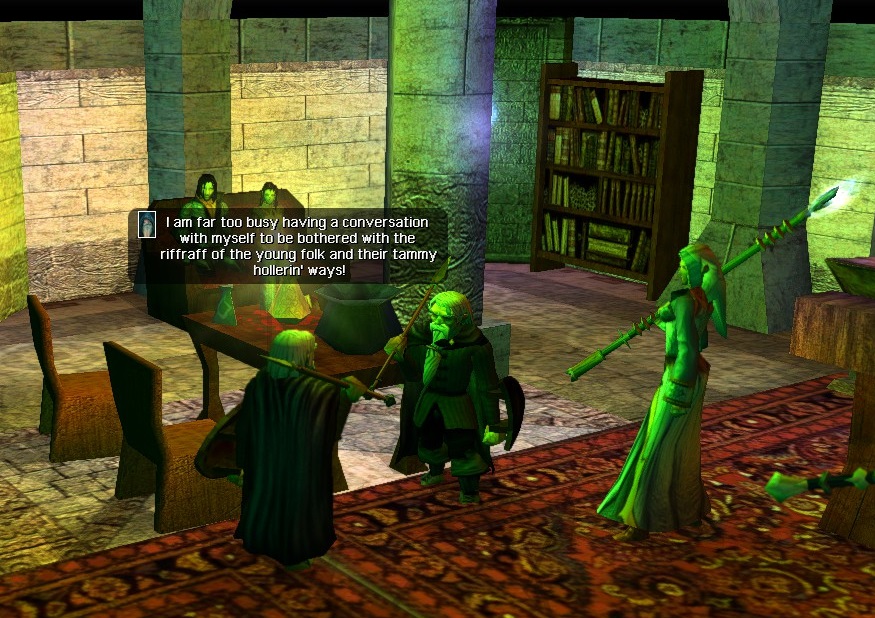 And let us not ever forget the Libram Servitor, a tiny mechanized golem found within the depths of Umbrick. Burin lead an investigation of lore when an ancient arcane scroll was found, and they sought to unlock what secrets it might contain. 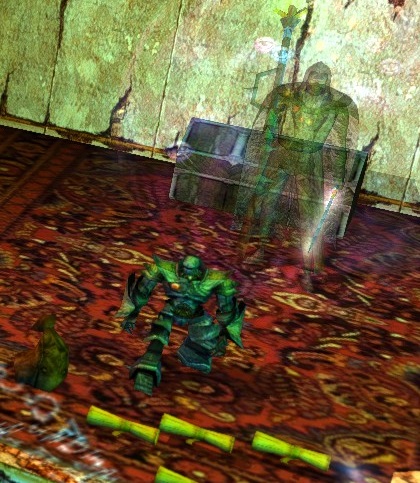 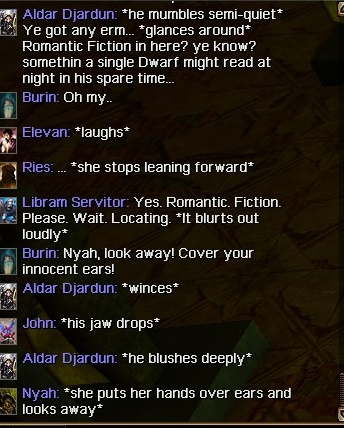